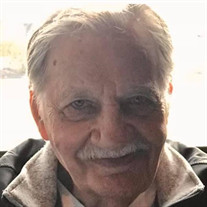 Morris George Brashaw, 93, of Bay City, our caring, loving, and protective husband, father, grandfather, brother, uncle, and friend went Home to be with the Lord on the afternoon of Tuesday, December 16, 2020, under the care of his loving daughter at her home. Morris was born in Bay City on October 18, 1927, the son of the late Morrison and Fern (Killingbeck) Brashaw. He graduated from Bay City Central High School and went on to attend Olivet Nazarene College. Answering the call of our country, Morris served in the U.S. Army during the Korean Conflict from 1950-1952. Upon returning home, Morris was united in marriage to the love of his life, the former Joan O. Paine on October 15, 1952. A devoted husband, Morris selflessly cared for his wife, Joan, for many years until he was unable to anymore. After 32 years of service, Morris retired from Consumers Energy, where he worked as a boiler operator. Those who knew Morris will forever remember his love of sports. He was known for watching two TVs stacked to monitor his favorite teams at the same time. Morris was proud of his involvement with winning the Bay County Billiards Championship, City Basketball Championship, and he was also a former Bay County Horseshoe Champion. Sports was Morris’ life. He had many happy memories of playing basketball, baseball, track, and football during his high school years, for city leagues, and for his church. He was a faithful member of First Nazarene Church, where he will be deeply missed. Morris leaves to carry on his legacy, his wife of 68 years, Joan Brashaw; children, Bethany (Richard) Loree and Morris (Janet) Brashaw; grandchildren, Matthew Loree and Ashley (David) Bergman; great-grandchildren, who were the lights of his life, Garrett, Logan, and Gracelyn Bergman; siblings, Lorraine McGregor, Gilbert, Brashaw, Delores Holmes, and Joyceann (Richard) Hayes; in-laws, James (Avis) Brown and Leone Brashaw, along with many nieces, nephews, and friends. In addition to his parents, Morris was welcomed Home to Heaven by his siblings and in-laws, Faith (Chester) Robinson, Maureen (William) Lockard, Harlan Brashaw, Guiles Brashaw, Avis (Paine) Brown, Shirley Brashaw, James McGregor, and Charles Holmes. Morris will forever be remembered for his bashful smile and selfless dedication to his family and friends. He will be deeply missed, yet lovingly remembered for generations to come. A Memorial honoring Morris will be held in the Spring of 2021. Memorial contributions may be directed to the wishes of the family. Expressions of sympathy may be shared with the family online at www.skorupskis.com.

Morris George Brashaw, 93, of Bay City, our caring, loving, and protective husband, father, grandfather, brother, uncle, and friend went Home to be with the Lord on the afternoon of Tuesday, December 16, 2020, under the care of his loving daughter... View Obituary & Service Information

The family of Morris George Brashaw created this Life Tributes page to make it easy to share your memories.

Send flowers to the Brashaw family.