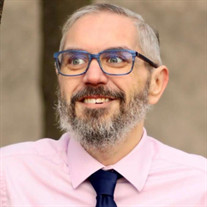 Nicholas James Wilinski, 43, of Milwaukee, formerly of Bay City, our loving, empathetic, thoughtful, and most loyal husband, son, brother, uncle, and loyal friend was born into eternal life on the morning of Friday, April 29, 2022 after a courageous battle with cancer. Nick was born in Bay City on July 7, 1978, the son of Michael and Mary Wilinski. He was a 1997 graduate of Garber High School and went on to attend Delta College, receiving his Associate Degree. Nick continued his studies at Central Michigan University, receiving his Bachelor Degree in political science with minors in philosophy and psychology and later earned his Master's in Public Administration, also from C.M.U. On August 23, 2003 in St. Hyacinth Church, Nick was united in marriage to the former Michelle Balwinski, who he described as "the best person ever who gave his life meaning." Nick spent most of his life as a career coach, and was known as an expert in the fields of resume writing and program development. Nick was a well-respected presenter on veterans’ issues. Always one to put the needs of others before his own, Nick especially enjoyed working with disabled and homeless veterans at the Center for Veterans Issues, helping to prepare them for employment. In 2016, Nick was one of six recipients to receive the distinguished Discretionary Merit Compensation Award from the Department of Workforce Development for outstanding work as a resume specialist. Nick also served his nation in Americorp/Vista at the Volunteer Center of Fond du Lac County, Wisconsin. Nick was known for his eclectic love of music, especially doom metal, punk, hip-hop, and opera. An avid brewer, Nick was a member of the North Shore Home Brew Club and The Society of Oshkosh Brewers. Nick's fun-loving and devoted ways will forever live on. To carry on his legacy, Nick leaves behind his wife of 19 years, Michelle Wilinski; father, Michael Wilinski; siblings, Emily (Michael) Brown and Carolyn (Scott) Gibson; grandmother, Lorraine Munley; niece and nephews, Alexis and Logan Brown and Alden and Elliott Gibson, and his mother-in-law, Connie Balwinski. Nick was preceded in death by his mother, Mary Wilinski, and father-in-law, Thomas Balwinski. Nick's family will be present to receive visitors on Friday, May 13, 2022 from 3:00 PM until 8:00 PM with a 6:00 PM Memorial Ceremony at Skorupski Family Funeral Home & Cremation Services, 821 N. Pine Rd., between Ridge & Center. Deacon Tim Hartwig will preside. Memorial contributions may be directed to the University of Wisconsin Carbone Cancer Center. Expressions of sympathy may be shared with the family online at www.skorupskis.com.

Nicholas James Wilinski, 43, of Milwaukee, formerly of Bay City, our loving, empathetic, thoughtful, and most loyal husband, son, brother, uncle, and loyal friend was born into eternal life on the morning of Friday, April 29, 2022 after a courageous... View Obituary & Service Information

The family of Nicholas James Wilinski created this Life Tributes page to make it easy to share your memories.

Send flowers to the Wilinski family.