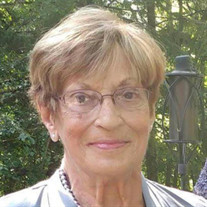 Noreetta Irene Humpert of Fairgrove, passed away on December 11 2021 at the age of 84. Our courageous, strong and committed mother, grandmother, great-grandmother, and sister, passed away peacefully at Brian’s House in Essexville surrounded by her family. Noreetta was born to Henry and Irene (Mosner) Beyer of Saginaw on August 1, 1937. Noreetta graduated from Reese High School in 1955. Following, Noreetta was married to Robert (Bob) Humpert in August 1956 for 60-years. Noreetta attended Delta College and went on to receive her LPN Nursing Degree. Over the years she worked at several different facilities, sharing her knowledge and passion in caring for people for over thirty years and continued with her passion through volunteering at one of the local hospitals. Throughout life, Noreetta was known for her love of snowmobiling and was a proud member of the Ogemaw Hills Snowmobile Club. She and Bob also enjoyed spending time with family and friends at Mack Lake. Noreetta’s grandchildren and great-grandchildren were the loves of her life as well as her pride and joy and she enjoyed spending time with each and every one. She also served as a proud member of the Akron-Fairgrove School Board and lastly, Noreetta was known as the “Real Boss” at R & R Farms of Fairgove. Noreetta’s memory will live on in the lives of her children, Randy (Judy) Humpert, Karen (Andrew) Hooper, and Ann (Curtis) Waterhouse; grandchildren, Jamie (Vincent) Brown, Kellie Humpert, Kati Hooper, Christopher Hooper, Chelsea Hunt, Kimberly Hunt, and Nicolas Waterhouse; great-grandchildren, Aria and Everly Swenson; brother, Tom (Jean) Beyer, and “adopted” son, Brent Clark. Noreetta’s passing was preceded by her husband, Bob, her parents Henry and Irene Beyer and her brother Dean. Noreetta's family will be present to receive visitors on Wednesday, December 15, 2021, from 3:00 PM until her 7:00 PM Funeral Ceremony at Skorupski Family Funeral Home & Cremation Services, 821 N. Pine Rd., between Ridge & Center. Memorial contributions may be directed to Ogemaw Hills Snowmobile Club. Expressions of sympathy may be shared with the family online at www.skorupskis.com.

Noreetta Irene Humpert of Fairgrove, passed away on December 11 2021 at the age of 84. Our courageous, strong and committed mother, grandmother, great-grandmother, and sister, passed away peacefully at Brian&#8217;s House in Essexville surrounded... View Obituary & Service Information

The family of Noreetta Irene Humpert created this Life Tributes page to make it easy to share your memories.

Noreetta Irene Humpert of Fairgrove, passed away on December...

Send flowers to the Humpert family.