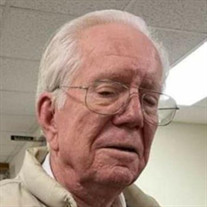 Norman Edgar Cosens, 81, of Akron, was a strong and hardworking, husband, father, Pa and friend, passed away on the evening of Monday, April 25, 2022 at McLaren Bay Region Hospital. Norman was born in Akron on March 24, 1941 to the late Leon and Aerial (Fox) Cosens. He graduated from Akron High School in 1959. Norman proudly served in the United States Army National Guard and served during the 1967 Detroit riot. Norman and Janis would be united in marriage on June 1, 1982 in Bay City. He would continue the family business as a farmer for many years until his son Rusty continued the farming. Norman was a member and former chairman of the board of trustees for the Wisner United Methodist Church. He was a "jack of all trades" and was able to repair and remodel anything given to him. In his free time, he enjoyed woodworking, watching YouTube and Westerns, and the most important joy of his life, spending time with his granddaughters. To carry on his legacy, Norman leaves his wife of 39 years, Janis (Karnes) Cosens; son, Rusty (Brandi) Cosens; granddaughters, Ellie May, Clara June and Audrey Lynne; aunt, Turk Wiergowski, and several nieces, nephews, cousins and friends. In addition to his parents, Norman was preceded in death by his brother, Gary (Fern) Cosens. Norman's family will be present to receive visitors on Thursday, April 28, 2022 from 1:00 PM until 8:00 PM at Skorupski Family Funeral Home & Cremation Services, 821 N. Pine Rd., between Ridge & Center. On Friday, April 29, 2022, Norman will be taken to Wisner United Methodist Church, 5375 N Vassar Rd, Akron, where visiting will continue from 10:00 AM until Norman's 11:00 AM Funeral Ceremony. Reverend Evan Oh will preside. Committal Ceremony and Military honors will take place in Wisner Township Cemetery following. Memorial contributions may be directed to Wisner United Methodist Church. Expressions of sympathy may be shared with the family online at www.skorupskis.com.

Norman Edgar Cosens, 81, of Akron, was a strong and hardworking, husband, father, Pa and friend, passed away on the evening of Monday, April 25, 2022 at McLaren Bay Region Hospital. Norman was born in Akron on March 24, 1941 to the late Leon... View Obituary & Service Information

The family of Norman Edgar Cosens created this Life Tributes page to make it easy to share your memories.

Norman Edgar Cosens, 81, of Akron, was a strong and hardworking,...

Send flowers to the Cosens family.