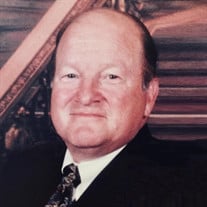 Richard Warren Haight, 79, of Kawkawlin, affectionately known as “Dick” by many, our dedicated, hardworking, and passionate husband, father, grandpa, brother, uncle, and friend was born into eternal life on Monday, January 17, 2022 at McLaren Bay Region. Rich was born in Hudson on March 1, 1942, the son of the late Joseph “Wayne” and Ida Mae (Fowler) Haight. He was a 1960 graduate of Hudson High School and went on to attend Tri-State College in Angola, Indiana, where he received his bachelor’s degree in mechanical engineering. While slalom skiing at Devil’s Lake, he happened to notice a beautiful young lady on the dock by the name of Karen Wagenknecht. Rich asked Karen to the dance at the pavilion, and the rest was history. On the same day as his college graduation, Rich was united in marriage to his loving wife between commercials during a baseball game on June 6, 1964 in Hudson. Rich and Karen’s marriage was blessed with 56 years, three children, four grandchildren, and countless memories. After a brief stint with Bay City Chevrolet, Rich began what would become his lifelong career as a custom builder with Bay-Wood Homes. Known for his meticulous attention to detail, Rich left his mark on many structures throughout the State of Michigan, and was a trailblazer in the area of energy efficient homes. In Rich’s free time, he enjoyed fishing, especially in Northern Michigan, in Canada, and Alaska. He was an avid car enthusiast, with his 1978 25th Anniversary Pace Car Corvette always holding a special place in his heart. Always a Hudson High School football fan through and through, Rich was elated to attend their winning game at Ford Field this past year, where they won the state championship. Rich’s love for his family was larger-than-life and his heart was always in the right place. His legacy will live on in the hearts of his family for generations to come. To carry on his legacy, Richard leaves his loving wife, Karen; daughter, Kristin (Bruce) Holder; twins, Kalen Poulos and Dayne (Holly) Haight; grandchildren, Brad Holder, Sarah Poulos, Ryan Poulos, and Elora Haight; sisters, Karen Ford and Cherie (Phil) Charpentier, along with many in-laws, nieces, and nephews. In addition to his parents, Rich was preceded in death by his brother, Lawrence (Kathy) Haight, and his brother-in-law, Dorrol Ford. Richard’s family will be present to receive visitors on Friday, January 21, 2022 from 1:00 PM until 8:00 PM with a 6:00 PM Memorial Ceremony officiated by Fr. Jose Maria Cabrera at Skorupski Family Funeral Home & Cremation Services, 821 N. Pine Rd., between Ridge & Center. The Rite of Committal will be held privately in the spring. Memorial contributions may be directed to St. Jude Children’s Research Hospital. Expressions of sympathy may be shared with the family online at www.skorupskis.com.

The family of Richard Warren Haight created this Life Tributes page to make it easy to share your memories.

Send flowers to the Haight family.