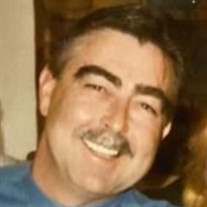 Richard Allen McBride, 69, of Bay City, Michigan and Parrish, Florida, our beloved husband, father, grandfather, brother, uncle and friend passed away Saturday, January 30, 2021 with his wife, Cathy, by his side. Son of the late Robert and Irene (Gelnaw) McBride, Richard was born October 25, 1951 in Pigeon, Michigan. He married Cathy Cobley on August 20, 1977. Richard retired from Henry Schein Dental in 2018, and from the United States Navy in 1992. Richard was an exceptional and successful Field Sales Representative with Henry Schein Dental. He received awards annually and was always a top ranking sales person. To his friends, coworkers and especially the dental community, Richard was known as a “Dental Legend.” He took care of them as a gardener tends his garden. If he couldn’t repair your dental equipment, then it probably wasn’t repairable. Richard loved his work and it showed. He always had a smile for everyone he met. He was beyond proud to have served with the U. S. Navy as a Chief Dental Technician, having been stationed in San Diego, CA, Okinawa, Norfolk, VA, Jacksonville, NC and Camp Pendleton, CA. Richard thoroughly enjoyed spending time with his family and attending his grandchildren’s activities and events. Richard loved all his furry family members also. Richard enjoyed riding his Harley, golfing and going to drag races in Bradenton, Florida. To carry on his legacy, Richard leaves his loving wife, Cathy; their children, Jodie (Bill) DuRussel and Scott Cianek; grandchildren, Ellie and Tyler DuRussel, and Scott Jr. and Chelsea Cianek. Richard is also survived by his brothers and sisters-in-law Joseph (Margaret) Robert, Charles (Kathy) and Patrick (Mary) McBride, and his sister, June Drake, along with many nieces and nephews. He is also survived by his wife’s family, who all loved him as their own, and his faithful furry companion, Abby. Richard was preceded in death by his parents, his brother, William, and sister-in-law, Connie McBride. Final arrangements have been entrusted to Skorupski Family Funeral Home & Cremation Services, 821 N. Pine Rd., between Ridge & Center. Memorial contributions may be directed to the Humane Society of Bay County. Expressions of sympathy may be shared with the family online at www.skorupskis.com.

Richard Allen McBride, 69, of Bay City, Michigan and Parrish, Florida, our beloved husband, father, grandfather, brother, uncle and friend passed away Saturday, January 30, 2021 with his wife, Cathy, by his side. Son of the late Robert and Irene... View Obituary & Service Information

The family of Richard Allen McBride created this Life Tributes page to make it easy to share your memories.

Send flowers to the McBride family.