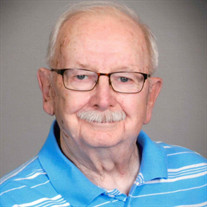 Richard Ronald Kasper, 91, of Bay City, our generous, kind, strong-willed, and occasionally feisty father and “Gramps” was born into eternal life on the afternoon of Friday, April 22, 2022 at McLaren Bay Region. Dick was born in Bay City on March 3, 1931, the son of the late John and Sadie (Springer) Kasper. He graduated from T.L. Handy High School in 1949 and went on to answer the call of our country, proudly serving in the U.S. Air Force during the Korean Conflict. While in the military, Richard met the love his life, the former Shirley Benoit. They dated, fell in love, and were united in marriage. Sadly, Shirley predeceased Richard in 1984. Dick retired from Consumers Energy, where he was an electrical engineer, known for his meticulous attention to detail. A man of faith, he was a faithful parishioner of Our Lady of Peace Parish and was a member of the Knights of Columbus, Council #414. Never one to sit still, he loved to volunteer. Most notably, Richard enjoyed volunteering at the Rechsteiner pancake breakfasts and the blooper ball rehab tournament. A true sports (especially University of Michigan) fan, Dick was an active referee for many area high school basketball and football games. He was also very involved with the John Glenn Booster Club and the Loyal Order of the Moose, and in his younger years, he enjoyed bowling, along with playing fast-pitch softball. More recently, Richard enjoyed an occasional trip to the casino or taking a “Dickie Drive By” to get out of the house and visit and check up on his family. Known to have a sweet tooth, Richard never had a short supply of goodies; you could be sure to find candy in every drawer stashed away. Above all, Richard’s family always came first. He was a wonderful father and grandfather who made a lasting impact on all who knew him. His sociable, humorous, and devoted ways will forever live on. To carry on his legacy, Richard leaves his three children, Terry Gillespie (Mike Hirschenberger), Shawn Kasper, and Christopher Kasper, and former daughters-in-law, Mary Smith, Pamela Smith, Lynne Hardin, and Kelli Kasper. He was the most awesome, loving, and supportive “Gramps” of Lacey Reed (David Kerkau), Benjamin (Jessica) Greenwood, Ashley (Matt) Gable, Lindzee (Erik) Folgate, Lauren Kasper (Johnny Conser), Matthew (Joanna) Kasper, Tyler Kasper, and Austin Kasper (Raquel Hernandez). Also surviving are his great-grandchildren, who were the lights of his life: Parker “Pickle,” Jasper, Benny, Charles, Keenan, Nathan, Grace, Grant, Ashlyn, Bryan, LJ, Ocean, River, and Violet; brother-in-law, John (Jeannie) Harvey and their son, Taylor; special nieces, Paula, Aileen, Linda, and their families, along with many extended family and friends. In addition to his parents and his wife, Richard was preceded in death by his great-grandson, Matthew Gable; siblings, Helen Forgash, Aileen Aaron, and Jack Kasper, and his nephew, Vincent Forgash. Richard’s family will be present to receive visitors on Thursday, April 28, 2022 from 3:00 PM until 8:00 PM, with a 7:00 PM Vigil at Skorupski Family Funeral Home & Cremation Services, 821 N. Pine Rd., between Ridge & Center. On Friday, April 29, 2022, Richard will be taken to Our Lady of Peace Parish (St. Mary’s Church), 607 E. South Union St., Bay City, where visiting will continue from 10:00 AM until Richard’s 11:00 AM Funeral Liturgy. Military honors and a luncheon will follow at church, with the Rite of Committal to be held privately in Calvary Cemetery, Kawkawlin. Memorial contributions may be directed to Our Lady of Peace Parish. Expressions of sympathy may be shared with the family online at www.skorupskis.com.

Richard Ronald Kasper, 91, of Bay City, our generous, kind, strong-willed, and occasionally feisty father and &#8220;Gramps&#8221; was born into eternal life on the afternoon of Friday, April 22, 2022 at McLaren Bay Region. Dick was born in... View Obituary & Service Information

The family of Richard Ronald Kasper created this Life Tributes page to make it easy to share your memories.

Send flowers to the Kasper family.