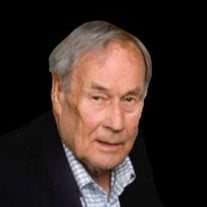 Richard Herman Schreiner, 89, of Thomas Twp., our adventurous, generous, honest, and thoughtful father, grandfather, and great-grandfather passed away peacefully on Saturday, March 26, 2022, at his home, with his family by his side. Richard was born on February 14, 1933 in Saginaw, the son of the late Herman and Helen (Young) Schreiner. He graduated from Arthur Hill High School. One night while out roller-skating, Richard met the former Shirley Mueller. They dated, fell in love, and were married on November 4, 1953. Richard, a proud countryman, honorably served in the United States Army. After his tour of duty, he returned home from Austria and worked for Consumers Energy for 24 years and later retired from General Motors after 24 years of service. He was a lifelong member of the Saginaw Field and Stream Gun Club and a faithful member of Good Shepherd Lutheran Church. Richard was one who was always up for an adventure. He enjoyed hunting and fishing. Richard enjoyed traveling to Canada, Alaska, Bahamas, Costa Rica, Africa, and Mongolia in search of the best catch. He loved cooking, gardening, spending time with the many little dogs he had over the years, and time spent with his family and friends. Richard will be dearly missed by all. To carry on his legacy, Richard leaves his children, Timothy Schreiner, Tamara Davis, Cynthia Hart, and Lisa Martin; grandchildren, Eric Davis, Nicole Davis, Steven (Angela) Schreiner, and Aleyshia Martin; great-grandchildren, Alexis, and Brady Schreiner; his sister, Jacqueline (Michael) Bender, and many nieces, nephews and cousins. Along with his parents, Richard was welcomed home to Heaven by his wife, Shirley, their twin children, and brother, Robert Schreiner. Richard’s family will be present to receive visitors on Sunday, April 3, 2022, from 4:00 PM until 7:00 PM at Skorupski Family Funeral Home & Cremation Services, 1550 Midland Rd., between State & Gratiot. On Monday, April 4, 2022, Richard will be taken to Good Shepherd Lutheran Church, 5335 Brockway Rd, Saginaw, where visiting will continue from 11:00 AM until Richard’s 12:00 Noon Funeral Ceremony. Rev. Paul Biber will preside, and interment will be held privately. Memorial contributions may be directed to Good Shepherd Lutheran Church. Expressions of sympathy may be shared with the family online at www.skorupskis.com.

Richard Herman Schreiner, 89, of Thomas Twp., our adventurous, generous, honest, and thoughtful father, grandfather, and great-grandfather passed away peacefully on Saturday, March 26, 2022, at his home, with his family by his side. Richard... View Obituary & Service Information

The family of Richard Herman Schreiner created this Life Tributes page to make it easy to share your memories.

Send flowers to the Schreiner family.