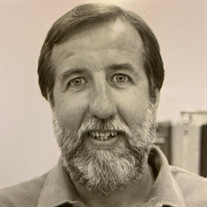 Robert James Anderson, affectionately known by all as “Pa,” 77, of Bay City, our loving, family oriented, and most generous husband, father, grandfather, brother, uncle, and friend, passed away on the afternoon of Thursday, May 5, 2022 at his residence. Bob was born in Bay City on February 12, 1945, the son of the late Robert James and Clementine (Dombrowski) Anderson. At the age of 14, Pa fell for his neighbor, the former Joan Marie Matthews. They dated, fell in love, and were united in marriage in a shotgun wedding on January 29, 1966. Pa retired from General Motors, where he worked as a machine operator for 35 years. He loved golfing, playing cards, and time spent with his entire family. Pa loved traveling and cheering on his grandson’s hockey team, and in his younger years when his sons were playing ball, he was a dedicated coach for Northwest Little League. Pa was the steady rock of the family who will be deeply missed, but lovingly remembered for years to come. To carry on his legacy, Bob leaves his faithful wife of 56 years, Joan Anderson, and his two sons, Scott Anderson and Jeffrey Anderson. Pa is also survived by his favorite grandson, Justin (Stephanie) Anderson, and his two great-grandchildren, who were the absolute lights of his life, Owen and Adelynn; his brother, Denny (Joan) Anderson; in-laws, Leo Matthews, John (Rose) Matthews, and Don Guthrie, along with many nieces, nephews, and their families, all who Pa held close to his heart. In addition to his parents, Bob was preceded in death by his three sisters, who he loved dearly and was very close with: Mary Ann “Pinky” Voss, Betty Voss, and Sally Guthrie. Pa’s family will be present to receive visitors on Tuesday, May 10, 2022 from 9:00 AM until Bob’s 11:00 AM Funeral Ceremony at Skorupski Family Funeral Home & Cremation Services, 821 N. Pine Rd., between Ridge & Center. Pastor Joe Atchinson will preside with interment to be held privately in Floral Gardens Cemetery. Memorial contributions may be directed to the wishes of the family. Expressions of sympathy may be shared with the family online at www.skorupskis.com.

Robert James Anderson, affectionately known by all as &#8220;Pa,&#8221; 77, of Bay City, our loving, family oriented, and most generous husband, father, grandfather, brother, uncle, and friend, passed away on the afternoon of Thursday, May 5,... View Obituary & Service Information

The family of Robert James Anderson created this Life Tributes page to make it easy to share your memories.

Robert James Anderson, affectionately known by all as “Pa,” 77,...

Send flowers to the Anderson family.