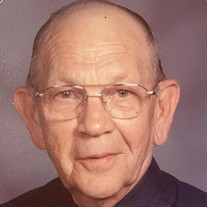 Bob Ahler, 90, of Hayden, Idaho, formerly of Essexville, our loving, compassionate, tender-hearted, gentle, and precious husband, father, grandfather, brother, uncle, and friend passed away on Saturday, August 7, 2021. Bob was born in Bay City on July 18, 1931, the son of the late Joseph and Mildred (Misener) Ahler. He was a proud U.S. Marine Corps Veteran, honorably serving during the Korean Conflict. Bob was united in marriage to the former Myrtle Prime on July 18, 1953. She preceded him in death on January 13, 2001. He later married the former Eunice Waterbury, who survives. Bob was a retired machinist from General Motors – Bay City Chevrolet and founder and former owner of Ahler Trophies Manufacturing of Essexville for over 60 years. He enjoyed bowling throughout most of his life, fishing with his special friend, Mike, golfing, and playing softball with his family. Bob was an avid University of Michigan fan and enjoyed being a Boy Scout Leader in his younger years. A true servant of the Lord, Bob loved to read his bible and was a faithful member of Immanuel Lutheran Church, while living in Essexville. He was also a member of Hayden Bible Church in Idaho, where he had many special friends both at church and in the community. His gentle and loving ways will forever live on. In addition to his wife, Bob leaves to carry on his legacy, his children: Cathy Ahler, Connie Davis, Robert (Ebbi) Ahler, and Cindy (Steve) Linton; daughter-in-law, Suzanne Ahler; grandchildren, Sherri (Joel) Buschlen, Carrie (Jeff) Sanak, Taren (Mike) Socier, Dan (Kristy) Ahler, Ashlee Ahler, Tim (Bonnie) Ahler, Trenton Davis, Heidi Ahler, Samantha Ahler, Jarret Ahler, Travis (Amerette) Tithof, Aaron (Stephanie) Tithof; fifteen great-grandchildren and five great-great grandchildren; brother, Dennis (Sharon) Ahler; along with many nieces, nephews, and friends. In addition to his parents and his first wife, Myrtle, Bob was welcomed home to heaven by his son, Timothy Ahler, son-in-law, Rod Loney, and brothers, Roy, Donald, and Jack Ahler. Bob’s family will be present to receive visitors on Thursday, August 12, 2021 from 3:00 PM until 8:00 PM at Skorupski Family Funeral Home & Cremation Services, 821 N. Pine Rd., between Ridge & Center. On Friday, August 13, 2021, Bob will be taken to Immanuel Lutheran Church, 300 N. Sheridan St., where visiting will continue from 10:00 AM until Bob’s 11:00 AM Funeral Ceremony. Interment will follow in Floral Gardens Cemetery. In lieu of flowers, memorial contributions may be directed to the wishes of the family. Expressions of sympathy may be shared with the family online at www.skorupskis.com.

The family of Robert "Bob" Ahler created this Life Tributes page to make it easy to share your memories.

Send flowers to the Ahler family.