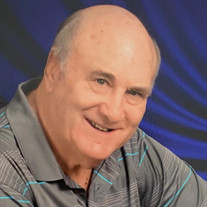 Robert Joseph Gradowski, affectionately known by many as “Grady,” 78, of Bay City, our tough, generous, and hilarious husband, father, grandpa and papa, brother, uncle, and friend was born into eternal life on the evening of Wednesday, July 29, 2020 at his home, surrounded by his loving family after a courageous battle. Bob was born in Bay City on December 17, 1941, the son of the late Stanley and Alphonsa (Andrzejewski) Gradowski. He graduated from T.L. Handy High School and proudly served in the U.S. Air Force. While out bowling, Bob happened to meet the former Barbara Jane Allman. They dated, fell in love, and were united in marriage in April of 1965. Bob worked for ACE Amusement for twenty-one years, never missing a day of work. He was a faithful parishioner of St. Joseph Church and also enjoyed hockey, especially coaching youth hockey for twenty years. Bob’s other hobbies included golfing (especially with Wally and his buddies), fishing, snow blowing for the entire neighborhood, and above all, watching his kids, grandkids, and great grandkids play in all their sporting events. Bob’s strong will and love for his family will live on for generations to come. Bob leaves to carry on his legacy, his devoted wife of fifty-five years, Barbara, and their two children: Brian (Corinne) Gradowski and Susan LaRocque. He was the most loving and supportive grandpa and papa of Joshua (Marina) LaRocque, Trey (Nicole) LaRocque, Elizabeth Gradowski, Brett (Priyanka) LaRocque, Tianna Pillaro, Tegan Pillaro, Kathryn Gradowski, Tiffany (Vicki) Willett, and Jake (Angela) Bourdlaies. Bob’s memory will live on his great-grandchildren, whom he absolutely adored: Aiden, Peyton, Ava, Ella, and Lexi. Also surviving are Bob’s siblings, Ernie (Irene) Gradowski and Maxine Kolat, along with many nieces, nephews, and friends. In addition to his parents, Bob was preceded in death by his brother, Virgil Gradowski; sister, Sr. Alice Ann Gradowski, and his father-in-law and mother-in-law, Gordie & Millie Allman. The Funeral Liturgy will be celebrated at 11:00 AM on Wednesday, August 5, 2020 at St. Jude Thaddeus Parish (St. John the Evangelist Church), 614 Pine St., Essexville. Fr. Dale Orlik will officiate with the Rite of Committal to be held privately in Great Lakes National Cemetery. Bob’s family will be present to receive visitors on Tuesday from 3:00 PM until 8:00 PM at Skorupski Family Funeral Home & Cremation Services, 821 N. Pine Rd., between Ridge & Center, and on Wednesday after 10:00 AM at church. In lieu of flowers, memorial contributions may be directed to Bay County Hockey Association or American Cancer Society. Expressions of sympathy may be shared with the family online at www.skorupskis.com.

Robert Joseph Gradowski, affectionately known by many as &#8220;Grady,&#8221; 78, of Bay City, our tough, generous, and hilarious husband, father, grandpa and papa, brother, uncle, and friend was born into eternal life on the evening of Wednesday,... View Obituary & Service Information

The family of Robert Joseph "Grady" Gradowski created this Life Tributes page to make it easy to share your memories.

Robert Joseph Gradowski, affectionately known by many as “Grady,”...

Send flowers to the Gradowski family.