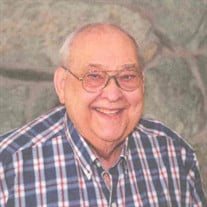 Robert Jack Krupka, 88, of Saginaw, our kind, caring, hardworking, and generous father, grandfather, great-grandfather, brother, uncle, and friend passed away on Sunday, August 9, 2020 in Saginaw. Bob was born on June 22, 1932 at home in Saginaw, the son of the late Claude and Daisy (Lange) Krupka. Bob graduated from Saginaw High School, class of 1950 and went on to attend Bay City Junior College, where he met the love of his life, the former Julie LaBreck. They dated, fell in love, and were united in marriage on June 11, 1955. Bob served in the U.S. Army during the Korean War and was stationed at Fort Chaffee, Arkansas from 1954 until 1956. Upon returning home, Bob attended University of Michigan and then Wayne State, obtaining his degree in general law. He worked at the National Labor Relations Board, then joined Wickes, and in 1974 went on to work for Cook, Nash, and Diebel Law. From 1975-1983, he was the chairman and president of the board at St. Luke’s Hospital. In 1989 Bob opened his own law firm, until his retirement in 2018. Throughout life, Bob enjoyed fishing, hunting, and above all, helping others. If there was anyone in need, he was there, always leaving a lasting impression. Bob will be missed dearly and lovingly remembered for years to come. Bob leaves to cherish his memory, daughter Carolyn (Mike) Allen of Merrill, son Robert (Dawn) Krupka, Jr. of Royal Palm Beach, Florida, daughter Amy (Rick) Prior of Fairgrove, and son William (Wendy) Krupka of Scotts; two grandchildren, Ricky (Chelsea) Werth and Rachel (Justin) Brown; great-grandchildren, Xander, Nova, Elijah, Emilyn, Emerson, and Elliot; step-great-grandchildren, Cameron, Chloe, and Bobby; sister, Shirley Krupka of Saginaw, along with several nieces, nephews, and friends. In addition to his parents, Bob was welcomed home to heaven by his wife of 55 years, Julie; brother-in-law and friend, Jack (Kay) LaBreck; mother-in-law, Eleanor Ball, along with his many beloved Labrador retrievers he had and rescued. Private arrangements have been entrusted to Skorupski Family Funeral Home, formerly Reitz-Herzberg, 1550 Midland Rd., between State & Gratiot. Private inurnment will take place in St. Andrews Cemetery. Memorial contributions in honor of Bob may be directed to the Saginaw County Animal Shelter or a charity of the donor’s choice. Expressions of sympathy may be shared with the family online at www.skorupskis.com.

The family of Robert Jack Krupka Sr. created this Life Tributes page to make it easy to share your memories.

Send flowers to the Krupka family.