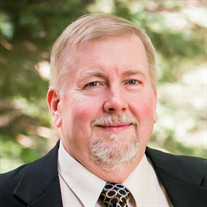 Scott Henry Hales, 65 of Saginaw, our charismatic, creative, stoic, faith filled, father and grandfather, went home to be with His Lord and Savior on January 27, 2021. Scott was born in Saginaw, Michigan on October 14, 1955, the son of the late Harry and Norine (Hallmann) Hales. Scott graduated Arthur Hill High School in 1973. He attended Michigan Tech for one year. Scott then went on to serve his country by joining the U.S. Army, where he honorably served as a Military Police Officer at Fort Louis, Washington. He also served in the Army Reserves for one year. Scott served during peace time after the Vietnam War. After his military service, Scott attended and graduated Delta College with an Associate’s Degree in Broadcasting. He worked for TCT Network for 15 years. Scott later went on to work for NBC 25 and then moved to Traverse City to work for ABC 29/8. Scotts’ other passions were being a Mentor and Life Coach to young men and sharing the love of Christ with others. He enjoyed photography, hunting, fishing and even enjoying a good cigar occasionally. Scott leaves to carry his legacy, his two loving daughters, Hope (John) Torongo, Faith (partner, Steve Kristinek); his grandchildren which were the joy of his life, Elijah, Grace, Joy, Levi, Audrey, Margaret, Elizabeth, Hannah; his siblings, Brian (Sherry) Hales, Norma (Mike) Perrone and Henry (Catherine) Hales. Along with his parents, Scott was preceded in death by his wife, Minerva Torres. Private arrangements have been entrusted to Skorupski Family Funeral Home & Cremation Services (formerly Reitz-Herzberg), 1550 Midland Rd., between State & Gratiot. Memorial contributions may be directed to Spirit Filled Lighthouse Church, 484 S. River Road, Saginaw, Michigan, 48609. Expressions of sympathy may be shared with the family online at www.skorupskis.com.

Scott Henry Hales, 65 of Saginaw, our charismatic, creative, stoic, faith filled, father and grandfather, went home to be with His Lord and Savior on January 27, 2021. Scott was born in Saginaw, Michigan on October 14, 1955, the son of the... View Obituary & Service Information

The family of Scott Henry Hales created this Life Tributes page to make it easy to share your memories.

Send flowers to the Hales family.