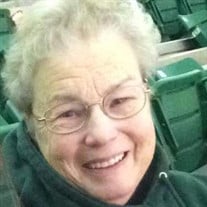 Our courageous wife, mother and grandmother, Shirlee Elsie Scovill, 69, of Bay City, went to be with the Lord on Saturday, February 5, 2022. Challenged with various health problems her entire life, she battled with grace until she was called home. Shirlee was born to the late Harold and Marie Johnson. She grew up in Lansing, graduated from Lansing Eastern High School and went on to attend the Lansing Business University. Roger and Shirlee were united in marriage on September 9, 1978 at First Presbyterian Church of Lansing. Soon after, the happy couple bought a home in Bay City where they resided ever since. Shirlee worked off and on in administrative positions throughout her life, but her most important job was raising her two daughters, Bethany and Katlyn. She was actively involved in their schools and extracurricular activities. She worked at MacGregor Elementary School as a lunch cashier for many years, led a Girl Scout troop, was involved in Band Boosters at Bay City Central High School and got the girls to music lessons or whatever sport they decided to try. In more recent years, you may have seen her behind the desk at any of the Bay City Public Schools as a substitute secretary. One of Shirlee’s biggest passions was her church and church family. The Scovill family were faithful members of Warren Avenue Presbyterian Church of Saginaw until its closing in 2018. Shirlee was the Clerk of Session and helped cater many meals and coffee hours over the years. Her baking skills were legendary, and she was well known for her delicious cookies and pies. She and Roger were involved with Habitat for Humanity in Saginaw, and she did her part by making a multitude of pies for the volunteers and families. Shirlee and Roger were proud Michigan State sports fans, attending most home football games over the years. GO GREEN! GO WHITE! She enjoyed bowling for many years and was an impressive crafter; she made many quilts and crocheted blankets. She most recently became interested in greeting card making, with many of her loved ones receiving them in the mail. Shirlee and Roger enjoyed traveling around the country and worked together to grow bountiful gardens of produce and flowers. You would often hear her talk of freezing, canning and trips to obtain quality fruit to preserve for those pies that were mentioned. With all that kept her busy, she always made time for her kids and grandkids, providing unconditional support in whatever joys or challenges they were facing. Shirlee leaves behind husband, Roger; daughters, Bethany Scovill and Katlyn Scovill (Rylan Hanson); grandchildren, Asher, Olivia, Raegen, Evan and Ashley; sisters, Carolyn (Jim) Teremi and Sharleen (Bill) Maynard; mother-in-law, Elaine Scovill; brother-in-law, Doug (Pam) Scovill; sister-in-law, Amy Scovill; brother-in-law Tom Hawkey, as well as several nieces and nephews and many dear friends that were like family. Along with her parents, Shirlee was welcomed home to Heaven by granddaughter, Matilda; father-in-law, Russel Scovill; brother-in-law, Ken Scovill; sister-in-law, Jenny Adams and nephew, Kurt Teremi. Shirlee’s family would like to thank everyone for their thoughts and prayers over the last few months. Due to COVID, they have decided to keep her memorial service private. The ceremony will be available to view online at www.skorupskis.com in the coming days. The family is planning a Celebration of Shirlee’s Life in the summer of 2022. Memorial contributions may be made to Countryside Trinity Church. Final arrangements have been entrusted to Skorupski Family Funeral Home & Cremation Services, 821 N. Pine Rd., between Ridge & Center. Expressions of sympathy may be given at www.skorupskis.com.

Our courageous wife, mother and grandmother, Shirlee Elsie Scovill, 69, of Bay City, went to be with the Lord on Saturday, February 5, 2022. Challenged with various health problems her entire life, she battled with grace until she was called... View Obituary & Service Information

The family of Shirlee Elsie Scovill created this Life Tributes page to make it easy to share your memories.

Send flowers to the Scovill family.