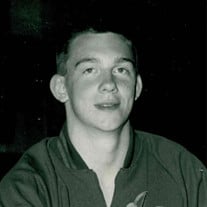 Stephen Douglas Skelcy, 46, of Saginaw, our talented, caring, and helpful, brother, fiancé, coach, teacher, and friend, passed away on March 15, 2021 at home in Saginaw. Steve was born on September 15, 1974, in Saginaw to Robert and Marilyn (Calkins) Skelcy. He graduated from Arthur Hill High School in 1992. Afterwards he attended and graduated from Lawrence University in Appleton, WI in 1996. While at Lawrence, Steve continued his swimming career and was a brother of the Sigma Phi Epsilon fraternity. After college, Steve was a teacher and swim coach at Arthur Hill High School. He was also a swim coach with Bay City Western High School and an assistant manager to the Saginaw Wave Pool. His passions in life included: swimming, camping, working with his hands, and education. For his accomplishments as a swimmer, Steve was awarded the Saginaw City Swimmer of the Year in 2005, was treasurer of the Saginaw Swimmers Association, and inducted into the Saginaw Swimmers Association Hall of Fame, and the Lawrence University Sports Hall of Fame in 2011. Steve is survived by his brother, Martin (Joanna) Skelcy and fiancée, Kanndin Davis. He is preceded in death by his parents Robert John Skelcy and Marilyn Skelcy; and brother Robert John Skelcy II. Visiting for Steve will be held on Friday, March 19, 2021 from 4:00 PM to 7:00 PM at Skorupski Family Funeral Home - Saginaw (formerly Reitz-Herzberg), 1550 Midland Rd, between State and Gratiot. Steve will be laid to rest at Kochville Cemetery. Expressions of sympathy may be shared with the family online at www.skorupskis.com.

Stephen Douglas Skelcy, 46, of Saginaw, our talented, caring, and helpful, brother, fiancé, coach, teacher, and friend, passed away on March 15, 2021 at home in Saginaw. Steve was born on September 15, 1974, in Saginaw to Robert and Marilyn... View Obituary & Service Information

The family of Stephen "Steve" Douglas Skelcy created this Life Tributes page to make it easy to share your memories.

Send flowers to the Skelcy family.