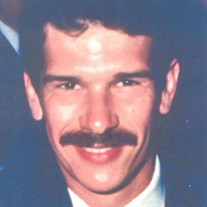 Not sure what to send?

Theron "Terry" William Monroe, 63, of Fairgrove, our dedicated, kind, and most loving husband, father, Papa, son, brother, uncle and loyal friend was born into eternal life on the evening of Friday, May 13, 2022 at the Toni & Trish House with his family by his side. Terry was born on July 20, 1958 to Theron and Carol (Brandow) Monroe in Sterling. He graduated from Akron - Fairgrove High School in 1976. After graduation, Terry courageously served in the United States Navy, level E5. He was very proud of his service, being apart of aircraft carriers Independence and Eisenhower as a shop supervisor. Terry met the love of his life, the beautiful Sabina Dinsmoore, in high school. They dated, fell in love and were united in marriage on October 6, 1976. Together they shared over 45 years and countless memories. Terry was an oil driller with Wixie Akin for many years, and then moved on to truck driving with Pyramid Paving for 20 years. He was a hard worker and enjoyed his career. He would regularly be found fishing, snowmobiling, or golfing. Terry was known for shooting off large firework displays. While he loved all of these things, nothing was more important to him than his family. Terry loved spending time with his daughter and granddaughter; they were the lights of his life. Terry's memory will live on in the hearts of many for years to come. Leaving to carry on Terry's legacy is his loving wife of 45 years, Sabina; daughter, Abere' Monroe; granddaughter, Laurel VanWagner; parents, Theron and Carol Monroe; siblings, Carrie Christy and David Monroe; brother-in-law, Marty (Stephanie) Dinsmoore, and special nephews, Kyle and Ryan Monroe, Nickolas Christy and Michael Gemmel. Terry was welcomed home to Heaven by his father-in-law and mother-in-law, Howard and Rosita Wegener; brother, Randy Monroe; brother-in-law, George Christy, and sister-in-law, Missy Monroe. Terry's family would like to extend a heartfelt thank you to the amazing staff at the Toni & Trish House. Your kind and compassionate ways will never be forgotten. Terry's family will be present to receive visitors on Thursday, June 9, 2022 from 3:00 PM until 7:00 PM, with a cocktail hour at 5:30PM at Skorupski Family Funeral Home & Cremation Services, 821 N. Pine Rd., between Ridge & Center. Memorial contributions may be directed to the wishes of the family. Expressions of sympathy may be shared with the family online at www.skorupskis.com.

Theron "Terry" William Monroe, 63, of Fairgrove, our dedicated, kind, and most loving husband, father, Papa, son, brother, uncle and loyal friend was born into eternal life on the evening of Friday, May 13, 2022 at the Toni & Trish House with... View Obituary & Service Information

The family of Theron "Terry" William Monroe created this Life Tributes page to make it easy to share your memories.