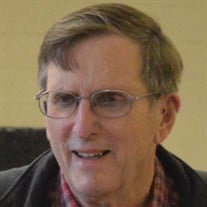 On Friday, April 9, 2021, Thomas John Ochodnicky passed away at Saginaw Covenant Hospital with his wife and daughters by his side. He was 77 years old. Tom was born in Saginaw on November 7, 1943, to John & Mildred (Shank) Ochodnicky, Tom had one older brother, Samuel (Brenda) Ochodnicky who preceded Tom in death. Tom was a DJ when he met Elaine Allen in 1968 and they had a short courtship before deciding that, after just two months, they were perfect for each other and got married in Cheboygan on September 7, 1968. They had a fabulous honeymoon in San Juan, Puerto Rico, then settled into married life. They welcomed two daughters, Lori in 1970 and Jean in 1973. Tom enjoyed his job as a toolmaker and spent forty years working for Fullerton Tool Company. Since retirement, he and Elaine enjoyed frequenting the casinos, entertaining their cats (who on most days preferred Tom’s lap to Elaine’s even though she was the one feeding them), Tom enjoyed tinkering in his garage, where he could be found holed up most days, he enjoyed wood working, fixing things, hunting, fishing and the outdoors. Tom was always good at indulging his wife, daughters, and granddaughters ideas for random projects: from a living room wall shelving unit, a bathroom shelf, a new front porch, and a rotating book display case and picnic tables for squirrels. Tom also found many of his own projects to keep himself busy. He spent over 40 deer seasons at “deer camp” with extended family & friends in northern Michigan where many memories were made, poker games were won & lost, and shenanigans happened, but few deer were ever brought home from “hunting camp”. Tom and Elaine enjoyed traveling and often would take their girls camping for a week in their beloved Airstream, then fly to a destination for a week. Most recently, in 2019, they took a family trip with their daughters, son-in-law, and granddaughters to Vermont so Tom could visit the American Precision Museum. This trip was Tom’s “bucket list” item, and he loved reading all the information on each of the displays and explaining them to his granddaughters. Tom was on the Board of Directors for United Financial Credit Union for forty-five years and enjoyed helping to grow a small credit Union (United Saginaw Credit Union) into the large credit union that UFCU is today, he enjoyed participating in many events with the credit Union during his forty-five years of service. Tom and Elaine spent over forty years as season members of The Bay City Players and enjoyed many performances over the years. Tom is survived by his wife, Elaine; his daughters, Lori (Sean) Penndorf & Jean (Don) Owens, he was predeceased by his son-in-law, Don Owens. Also surviving are his granddaughters, Kierstin Fureigh and Ella Penndorf, his sister-in-law, Betty Thom, brother-in-law Jerry (Sandy) Allen, sister-in-law Brenda Ochodnicky, many cousins, nieces, nephews & great nieces and nephews as well as many wonderful long time friends, including Don (Barb) Meinecke, Art (Sandy) Meyer, Jan Hennink, Randy (Carol) Wilhelm and Godsons Brian Meyer and Dan Wilhelm. A memorial service is planned for April 16, 2021, at Skorupski Funeral home on 1550 Midland Rd, Saginaw, MI 48638. There will be open visitation from 10:00 am - 12:00 pm and 4:00 pm - 6:00 pm with a private service, due to size limitations from COVID, at 6:00 pm for family and close friends. In lieu of flowers a donation may be made to Amazing Grace Animal Rescue 3365 Freeland Rd, Saginaw, MI 48604 or memorial offerings may be made to the discretion of the Ochodnicky family. Obituary lovingly submitted by the family.

On Friday, April 9, 2021, Thomas John Ochodnicky passed away at Saginaw Covenant Hospital with his wife and daughters by his side. He was 77 years old. Tom was born in Saginaw on November 7, 1943, to John & Mildred (Shank) Ochodnicky, Tom had... View Obituary & Service Information

The family of Thomas John Ochodnicky created this Life Tributes page to make it easy to share your memories.

Send flowers to the Ochodnicky family.