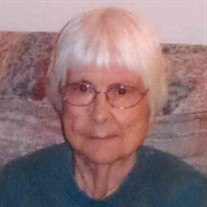 Jean Bloniarczyk, 89, of Saginaw, Michigan, our loving, caring, compassionate, wife and mother, passed away at home on February 23, 2021. Jean was born on January 6, 1932 in Saginaw, Michigan to the late Theron and Helen (Holford) Kohn. Jean attended Arthur Hill High School. She met William Bloniarczyk at Golden Glow Ballroom, where he swept her off her feet, fell in love and were married in March 3, 1956. They enjoyed 64 years of marriage. She became a nurse at Saginaw Osteopathic Hospital for 12 years. Later she took on the role of mother to two wonderful sons, which was her greatest role that gave her much fulfillment. Jean enjoyed spending time at their family cottage on Lake George. She had a great love of animals and was known to take in any stray animal that came her way. Some of her favorite past times included gardening and planting flowers. Jean leaves to carry on her legacy, her loving husband, William; children Roger Bloniarczyk and Jim Bloniarczyk; grandsons, Kevin and Nathan Bloniarczyk; and sister-in-law, Vi Bloniarczyk. In addition to her parents, Jean was welcomed home by her siblings, Robert Kohn, Albert Kohn; In-Laws, Frank (Gertrude) Bloniarczyk, Sophie (Henry) Nerchal, Stella (Delber) Dague, Irene (Marty) Kern, Robert Bloniarczyk, Walter (Jean ) Bloniarczyk, Leonard Bloniarczyk and daughter in law, Julie Bloniarczyk. Visiting for Jean will be on Tuesday, March 2, 2021 from 10:00 AM to 1:00 PM until her 1:00 PM Funeral Ceremony at the Skorupski Family Funeral Home, Arrangements have been entrusted to Skorupski Family Funeral Home & Cremation Services (formerly Reitz-Herzberg), 1550 Midland Rd, Saginaw. Rite of Committal to follow at Roselawn Mausoleum in Saginaw. The family would like to extend a special thank you to Elara Caring Hospice for their compassionate care and support. Memorial contributions may be directed to the wishes of the family. Expressions of sympathy may be shared with the family online at www.skorupskis.com.

Jean Bloniarczyk, 89, of Saginaw, Michigan, our loving, caring, compassionate, wife and mother, passed away at home on February 23, 2021. Jean was born on January 6, 1932 in Saginaw, Michigan to the late Theron and Helen (Holford) Kohn.... View Obituary & Service Information

The family of Vera Jean Bloniarczyk created this Life Tributes page to make it easy to share your memories.

Send flowers to the Bloniarczyk family.