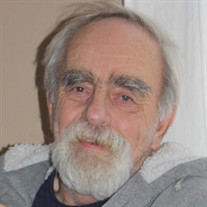 Walter Frank Bryden, Jr., 78, of Bay City, our curious, kind, and determined husband, father, and grandfather passed away on Sunday, April 3, 2022. Walt was born in Bay City on August 7, 1943, the son of the late Walter Frank Bryden, Sr., and the former Evelyn Virginia Lerczak. He was a 1961 graduate of T.L. Handy High School, attended Delta College, and went on to further his studies at Central Michigan University and Saginaw Valley State University. Walt proudly served in the U.S. Air Force, and was stationed in Sault Ste. Marie with the 753rd Radar Squad. While working in the social work field in Ludington, Walt happened to notice the beautiful smile of the former Ruth Nickerson. They eventually dated, fell in love, and were united in marriage on May 3, 1980. Walt worked for the State of Michigan as a social and mental health worker, and was also a rehab counselor in many places, including: Roscommon, Big Rapids, Ludington, Plymouth, Bay County, Caro, and Mt. Pleasant for a number of years, prior to his retirement in 1990. Always one to stay busy, after retirement, Walt began his second career as an alternative education teacher in Bay City, helping many find their path in life by obtaining their GED, and was also a Driver's Education instructor. Walt was a man of many hobbies and enjoyed woodworking, tinkering, motorcycles, photography, and reading. A true lover of the outdoors, Walt also enjoyed canoeing and camping, especially on Lake Superior, which he always referred to as The "Superior" Lake. In addition to time in the Upper Peninsula, Walt and family enjoyed many travels and road trips, including going to Alaska and traveling up and down the East Coast. A natural people person, Walt enjoyed talking extensively with new people he met along the way through life. A wonderful family man, Walt was a kind soul and always willing to help others. He will be deeply missed, yet lovingly remembered for years to come. To carry on his legacy, Walt leaves his faithful wife of 42 years, Ruth Nickerson-Bryden; their two daughters, Rebecca Lucille Bryden and Elizabeth Evelyn (Sam) Bryden-Miller; grandchildren, who were the lights of his life, Felix and Ivy Miller; his three nieces and their families: Jennifer (Mark) Hickmott, Danielle (Brian) Lukowski, and Kathleen (Phil) Diaz. In addition to his parents, Walt was preceded in death by his sister, Judy Patricia Rock and her husband James Rock. Walt's family will be present to receive visitors on Tuesday, May 3, 2022 from 10:00 AM until Walt's 11:00 AM Life Celebration at Skorupski Family Funeral Home & Cremation Services, 821 N. Pine Rd., between Ridge & Center. The entire family wishes to extend a heartfelt thanks to Lansdowne Heights Memory Care for their compassionate care. Always an avid reader of nonfiction science and history, memorial contributions in memory of Walt may be directed to the Bay County Library System or Bay County Animal Services and Adoption Center where he adopted his favorite walking buddy, the late Maxie the dog. Expressions of sympathy may be shared with the family online at www.skorupskis.com.

The family of Walter Frank Bryden, Jr. created this Life Tributes page to make it easy to share your memories.