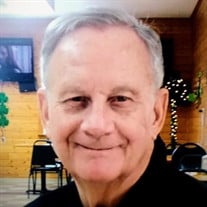 Bill Jahr, 75, of Freeland, passed away unexpectedly on Wednesday, April 27, 2022. Bill was born in Port Huron on May 10, 1946 and grew up in Sebewaing, the son of the late Clarence and Lottie (Weichert) Jahr. He graduated from Sebewaing High School with the Class of 1964, maintaining a strong bond and everlasting friendship with many of his classmates through the years. After high school, Bill entered the U.S. Marine Corps and served honorably in Vietnam for four years, attaining the rank of Sergeant. Twenty-five years ago, Bill met the love of his life, Dianne Rombalski Dubay, while at a Singles Dance in Saginaw. The couple was eventually married on November 30, 1994. Bill spent his life in the insurance business helping people. Known for his love of fishing, Bill was “The Fishing Machine!” When not fishing, Bill also enjoyed meticulously tending to his yard and cooking. Time went too fast, and his wife and family are left to mourn this terrible loss. Some of the comments his wife received include, “Bill was the most genuine and fantastic man I’ve ever met.” Another said, “The funniest man that I know. Bill is like a brother to me.” Many remarked at how devastated they are with Bill’s loss, with whole families crying all night when they heard the news. Always young at heart, Bill’s humble and hardworking ways will never be forgotten. His morality, kindness, and generosity were extraordinary. Bill’s wife Dianne is devastated, and she will mourn Bill the rest of her life. Bill’s legacy will forever live on in the hearts of all the family and friends who knew him. Bill’s family will be present to receive visitors on Sunday, May 1, 2022 from 12:00 Noon until Bill’s 2:00 PM Funeral Ceremony at Skorupski Family Funeral Home & Cremation Services, 1550 Midland Rd., between State & Gratiot. Mr. Alan Brown will preside. A reception will follow the 2:00 PM Funeral Ceremony in The Wesley Room at Skorupski's. Interment will be held privately in Great Lakes National Cemetery, Holly. Memorial contributions may be directed to St. Jude Children’s Research Hospital or Semper Fi Foundation. Expressions of sympathy may be shared with the family online at www.skorupskis.com. To view Bill's Life Celebration tribute click the following link https://www.tributeslides.com/tributes/show/JKR2TJWH3TYHHFNZ

Bill Jahr, 75, of Freeland, passed away unexpectedly on Wednesday, April 27, 2022. Bill was born in Port Huron on May 10, 1946 and grew up in Sebewaing, the son of the late Clarence and Lottie (Weichert) Jahr. He graduated from Sebewaing High... View Obituary & Service Information

The family of William Joseph Jahr created this Life Tributes page to make it easy to share your memories.

Bill Jahr, 75, of Freeland, passed away unexpectedly on Wednesday,...

Send flowers to the Jahr family.