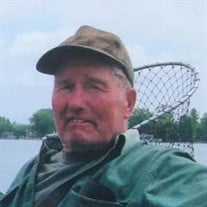 William Edward Arthur LaBrake, 93, of Freeland, Michigan our loving, caring, devoted husband, father, grandfather, and brother, went to be with the Lord on March 11, 2021 at his home. William was born August 26, 1927 in Saginaw, Michigan to the late Sidney and Flora (Witt) LaBrake. He graduated from Arthur Hill Trade School in 1944. He served in the U.S. Merchant Marines during WWII and received an honorable discharge from the U.S. Coast Guard. He met the former Lorraine R. Martin, they dated and fell in love and were married on September 3, 1949 and celebrated 71 years of marriage. He was employed by Mitts & Merrill for 28 years, retiring in 1985. William was an avid hunter and fisherman and an honorary lifetime member of the Saginaw Field and Stream Club where he enjoyed working, “Sight-In-Days” every November. His interests included small engine repair and working with wood. He was a natural “Mr. Fix It” and generous with his talents. William leaves to carry his legacy his wife and their two children, Marcy A. Jerome, Larry E. LaBrake; grandsons, Matthew (Angela) Jerome, William Jerome, Joshua (Ashley) LaBrake; great-grandchildren, Kaylen, Jacob, Luke, Audrey, Mark, Sophie, Eve, Clare; his siblings, Sally Tinney, Nancy (David) LaBeau; Sidney LaBrake; several nieces and nephews and special friend, Nicholas DeFrancesco. Along with his parents, William was preceded in death by his sisters, Joyce Thormeier, Marlene Books and sister-in-law, Carole LaBrake and brothers-in-law, Grant Thormeier, John Tinney. He truly enjoyed watching his son and three grandsons, grow into manhood and share his love of hunting, fishing and the great outdoors. Private arrangements have been entrusted to Skorupski Family Funeral Home & Cremation Services (formerly Reitz-Herzberg), 1550 Midland Rd., between State & Gratiot. Inurnment will take place at Roselawn Memorial Gardens. Memorial contributions may be directed to Saginaw Field and Stream Scholarship Fund or a charity of the donor’s choice. Expressions of sympathy may be shared with the family online at www.skorupskis.com.

William Edward Arthur LaBrake, 93, of Freeland, Michigan our loving, caring, devoted husband, father, grandfather, and brother, went to be with the Lord on March 11, 2021 at his home. William was born August 26, 1927 in Saginaw, Michigan to... View Obituary & Service Information

The family of William Edward Arthur LaBrake created this Life Tributes page to make it easy to share your memories.

Send flowers to the LaBrake family.