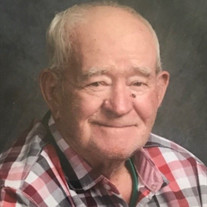 William Richard Wade, 84, of Hemlock, our loving father, grandfather, and great-grandfather, was reunited in Heaven with his wife on September 2nd, 2019. He passed peacefully at his home, with family by his side.  Bill was born on October 16th, 1934 in Hemlock, MI to his parents, James Cecil and Mary (Scoles) Wade. He had fourteen brothers and sisters. He graduated from Hemlock High School in 1953, after which time he joined the U.S. Army. He served from 1955-1957 and earned a medal for being a sharpshooter (this is no surprise as he had been shooting squirrels and rabbits for years). He married Marlene Shepherd on December 6th, 1958 and the two had four children. Bill spent his whole life farming and started at a young age working the Wade Farm until it sold in 1973. From there he worked at Thompson Products at night, and during the day he farmed for Frank Jugnitsch.  Bill was the “Perfect” fan of watching his children, grandchildren, and great-grandchildren play sports, and even coached his sons' baseball. Bill had large gardens and enjoyed sharing the fruits of his labor with friends and family. He was a huge M.S.U. fan which you could tell by the flags he would fly on his car. Everyone knew if he was at coffee because his car wasn’t hard to miss. Bill also enjoyed baking pies for his church, going to local sporting events, and listening (and dancing) to polka music. He was an avid hunter and loved to display his trophies on the walls of his home. Bill was lucky enough to marry a woman who tolerated his favorite pastime and even allowed him to take hunting dogs on their honeymoon so he could go rabbit hunting.  Bill was very social, outgoing, and was always thinking of others. His doors were always open to visitors and he was always willing to lend a helping hand. His relationship with his grandchildren and great-grandchildren was one for the record books. He shared his love of hunting with his grandsons. Every year he would take his grandchildren to the fair and then when he had great-grandchildren he insisted on carrying on that tradition. If you rode in the car with him you had to be prepared as he might suddenly swerve the car and tell you to “hop out and grab that pop can!” That is 10 cents ya know.   Bill was preceded in death by his parents, James Cecil and Mary Wade; his wife, Marlene; grandson, Christopher, and great-granddaughter, Madelyn Grace. His siblings Howard, Edith, Eugine, Clarence, Herbert, Carl, Alice, and James were also waiting at Heaven's gates to welcome him Home.   He is survived by his four children, Robin Wade, Norman (Kathleen) Wade, Rebecca Pahl and William (Billy) Wade. He is also survived by his grandchildren: Brenna (Matt) Lockwood, Joshua Pahl, Justin Pahl, Megan (Joshua) Whitney, Ben (Stephanie) Wade, Anna Wade, Zachary Wade, Alexandria “Mokie” Wade, Haythan Wade and Noah Wade. Bill enjoyed spoiling his great-grandchildren: Patrick, Sadie, Bennett, Jackson, and Jacob. He spent the last few summers teaching his oldest great-grandson, Patrick, how to garden and was always proud of how straight his rototilling was.  Also surviving are his siblings: Agnes, Pauline, Bruce, Grace, Margaret, and Mary Ellen. As well as his in-laws, Faye Cruse, Gail (David) Kwapis, Estella Hudeck, and Ronald Shepherd.  We know the gardens in heaven will be well-tended and he is catching up with Christopher and spoiling Madelyn.  As Bill was a simple man we ask that you keep your dress casual and encourage you to wear your green and white MSU gear. That goes for all you Wolverines too :)  Bill's family will be present to receive visitors on Friday, September 6, 2019, from 5:00 PM until 8:00 PM at Skorupski Family Funeral Home & Cremation Services (formerly Reitz-Herzberg), 1550 Midland Rd., between State & Gratiot. On Saturday, September 7, 2019, Bill will be taken to Nelson United Methodist Church, 5950 S. Hemlock Rd., Hemlock, where visiting will continue from 9:00 AM until Bill's 10:00 AM Funeral Ceremony. Interment will follow in Fremont Twp. (Nelson) Cemetery. The family wishes to extend a heartfelt thanks to Covenant V.N.A. for their care of Bill in his final days. In lieu of flowers, memorial contributions may be made to the Pulmonary Fibrosis Foundation. Bill was diagnosed nine years ago with this incurable disease, and he would want others to have a chance at a cure. When Pastor came to visit he asked Bill what he would like a prayer for, and in true fashion, he stated, “Pray for everyone else who is sick.” Expressions of sympathy may be shared with the family online at www.skorupskis.com.  Then Jesus said, “Come to me, all of you who are weary and carry heavy burdens, and I will give you rest. - Matthew 11:28

William Richard Wade, 84, of Hemlock, our loving father, grandfather, and great-grandfather, was reunited in Heaven with his wife on September 2nd, 2019. He passed peacefully at his home, with family by his side.  Bill was born on October 16th,... View Obituary & Service Information

The family of William Richard Wade created this Life Tributes page to make it easy to share your memories.

Send flowers to the Wade family.