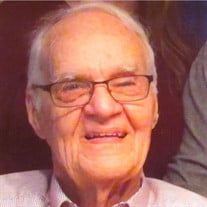 Willis T. “Bill” Enszer, age 89, of Saginaw, passed away peacefully on Wednesday, August 11, 2021. The eldest son of Willis C. and Catherine Margaret Enszer, Bill was born on July 12, 1932. He graduated from Arthur Hill High School in 1950, took a job at Saginaw Steering Gear (Plant 2), and enlisted in the Army Security Agency (ASA), serving in Korea for three years. He came home to marry his sweetheart, Lucille Ann Johnson, on July 14, 1956. They became active members of Faith Ev. Lutheran Church, where they served on many boards and committees. He retired as a respected foreman from Plant 2 in 1987. He and Lucille traveled around the U.S. and Europe, cruised the oceans, and wintered in Mesa, AZ for 17 years, where they made many friends, learned to square dance, and went on many hiking adventures. He will always be remembered as a wonderful husband, father, brother, uncle, grandfather, great-grandfather, and friend. Bill is survived by his loving wife of 65 years, Lucille; sons, Mark R. (Marsha) Enszer and David W. Enszer; grandchildren, Joshua Enszer, Sean (Lisa) Enszer, and Megan Enszer (Cody Danke); great-grandchildren, Cristian, Sofia and Victoria Enszer; sister, Marcia (Roger) Romain; brother-in-law, Christopher Smith, and sister-in-law, Joannie Johnson. In addition to his parents, he was preceded in death by an infant daughter, Mary Catherine Enszer, and his brother and sister-in-law, James C. and Carol Enszer. Bill’s family will be present to receive visitors on Sunday, August 15, 2021 from 1:00 PM until 3:00 PM and 4:00 PM until 6:00 PM at Skorupski Family Funeral Home & Cremation Services, 1550 Midland Rd., between State & Gratiot. On Monday, August 16, 2021, Bill will be taken to Faith Ev. Lutheran Church, 4432 Mackinaw Rd., where visiting will continue from 11:00 AM until Bill’s 12:00 Noon Funeral Ceremony. Pastor John Soyster will officiate with entombment to follow in Roselawn Memorial Gardens. Memorial contributions may be directed to Faith Lutheran Church or the Alzheimer's Association. Expressions of sympathy may be shared with the family online at www.skorupskis.com.

The family of Willis "Bill" T. Enszer created this Life Tributes page to make it easy to share your memories.

Send flowers to the Enszer family.